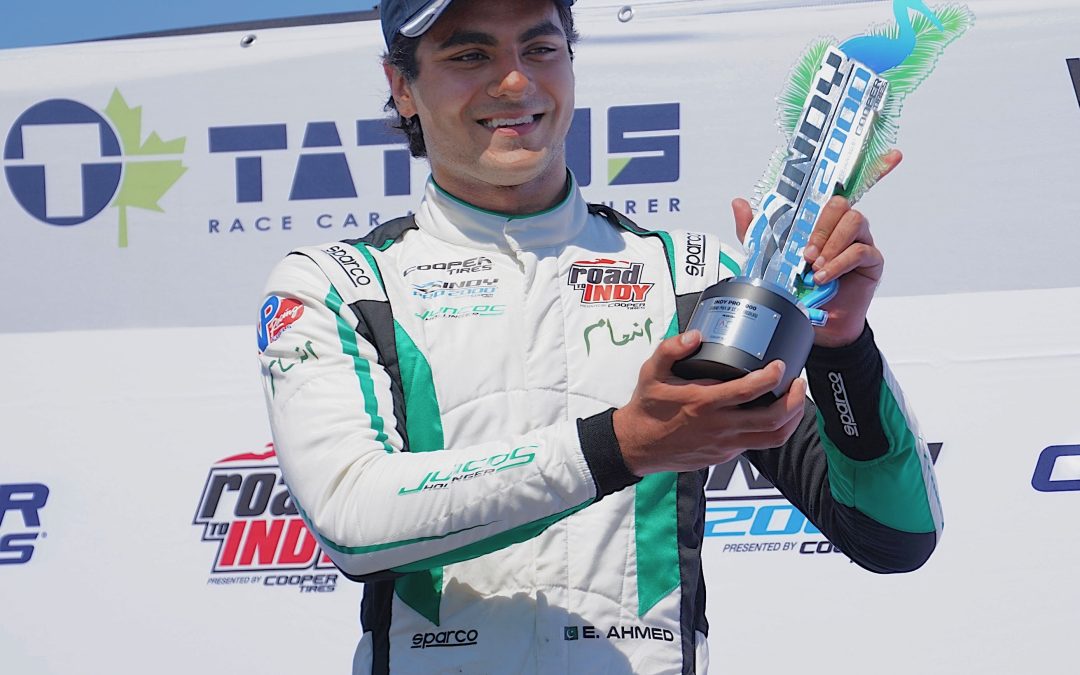 Enaam Ahmed made history on Friday, February 25 as he became the first driver from Pakistan to stand on the podium of a race in the very competitive “Road to Indy” ladder. The 22-year-old started his 2022 season on a high note in Indy Pro 2000 series by taking second place in the opening round of the season, held in typical Florida sunshine in the streets of St. Petersburg.

Enaam qualified for the 25-lap race on the front row. American driver Josh Green established an early 3s lead from pole position. Lap by lap his lead was reduced by Enaam, and by lap 16 he was within striking distance. When the chequered flag came out he was only .6s behind Green.

Speaking to F1Weekly.com after the race Enaam expressed his experience of the first race of the season; “Very, very happy to be top three in the first race. I was the quickest on track in the race but unfortunately it’s really difficult to pass because it’s a street circuit, but really happy to start the season like this, and also the team gave me a really good car which I’m really happy about and we kept in one piece.”

The American racing landscape is unique. No other series in the world offers racing on variety of tracks as in the United States; from racing tracks (Road America and Mid-Ohio) to street circuits (St. Petersburg and Toronto) to high-speed ovals in Indianapolis and Madison, near St Louis, Missouri. There are 18 races in 2022 and the season will conclude in Portland, Oregon in September.

Enaam is focused on the big picture and winning the championship. “I think I have a very high chance of winning as long as I play my cards right and I’m always there with my pace. Thanks to everyone supporting me, the more support I get it pushes me to go faster and gives me a lot of encouragement so thank you very much.

Enaam, the 2017 British Formula 3 Champion, has been a race winner all over the world from Europe to Japan and New Zealand.

After a brief foray in the American racing scene last year, Enaam has joined championship winning team Juncos Hollinger Racing for this season.

Team owner Ricardo Juncos, who hails from Buenos Aires, Argentina, expressed confidence in his young charge saying, “We are excited to continue our work with Enaam into the 2022 Indy Pro 2000 season.

“He really showed how strong of a driver he is at the end of last season when he almost won the final race, if he had one more lap we are confident he would have come away with the victory.

“Enaam has been a great addition to our programme and we are looking forward to carrying the strong momentum we have built in the off-season.”

His Friday’s achievement can be viewed on Indy Pro 2000 series You Tube channel. Next race will be at Barber Motorsport Park in Alabama on the last weekend of April.